Virat Kohli is a well-known Indian cricketer who is presently in a position of the Captain of Indian cricket team. He is considered as the best batsmen among all the right-handed batsman in the world. In Indian Premier League, Virat Kohli plays from the side of the royal challenges Bangalore team.  He is the caption of the team since the year 2013. 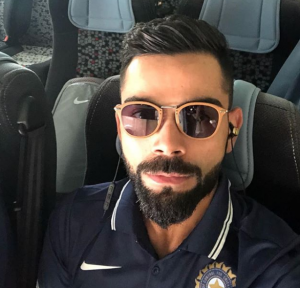 Virat Kohli was born on 5th November 1988. He was born and brought up in Delhi only. His family consists of his father Prem Kohli, his mother Saroj kohli, and elder brother vikash and sister Bhavna. His family shared Virat’s kohli childhood incident that he picked the bat at age of 3 years and asked his father to throw ball at him. Virat completed his schooling from Vishal Bharti Public School and at age of 9 years, he joined the cricket professional academy.

Initially, he was chosen as captain in under 19 Indian teams and won Under-19 world cup in Malaysia in 2008. After the fact, he made his ODI against Sri Lanka at the age of 19 years. He first played as a reserved batsman for Indian team and then he came in center position following to that he made himself in the main Indian cricket team at the time of World cup 2011. In 2012, he grabbed the attention of whole Indian team towards him and made himself the center of attraction.

Virat Kohli love life is well known by everyone. Recently, the wonderful cricketer got hitched with the stunning actress Anushka Sharma. They are giving everybody couple goals. Their exceptional wedding took place on 11th December 2017 in Italy. It was a secret wedding and they get caught in the eyes of media after the wedding when their wedding videos and snaps released on the social media.