Talented Shanthakumaran Sreesanth is among the popular and astonishing cricketers. He has begun his career as a leg-spinner and turned into the mainstream fast-bowler within no time. He is proudly counted as one of the efficient bowlers of Indian cricket team. He has a short cricket career but has motivated most bowlers on the ground. Along with performing brilliantly on the field, the cricketer was awesome off the field too. Sreesanth is being a famous and versatile personality in almost every field whether it is the stage actor, dance, politics, fitness etc. 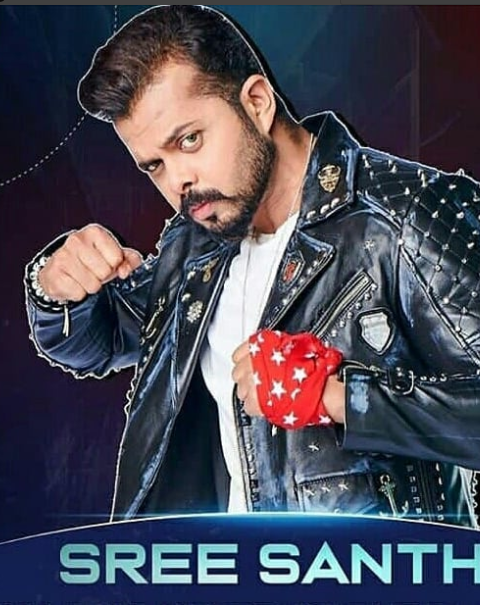 Sreesanth was born in Kothamangalam Kerala on 6th February 1983. He was a dance champion when he was studying in 8th standard. After completing 11th standard, he left his study to focus his career on cricket. He finished his schooling till 11th standard from Bhavans Vidya Mandir, Elamakara, and Kochi. He was a leg-spinner in his childhood period. He made Anil Kumble his role model and follows his techniques. By realizing his ability to bowl deadly Yorkers, Sreesanth’s elder brother motivates him to become a fast bowler. Now, he has emerged as one of the best fast bowlers in domestic and national circuits.

Sreesanth’s father name is Santhakumaran Nair who is a retired insurance officer and his mother name is Savitri Devi who is a retired state government servant. He is a brother of two sisters- Nivedita and Divya. Nivedita is an Indian television actress in Kerala state. Divya is a south Indian playback singer who is married to Madhu Balakrishnan. He has a elder brother also –Dipu Santhan who is a owner of music company in Kochi.

Sreesanth got hitched to his long time girlfriend Bhuvneshwari Kumari. They got married on 12 December 2013 at Guruvyar Sri Krishna temple in Kerala. Her wife is from a jaipuri Shekhawat family. The couple gave birth to a daughter on 27 July 2015 whom they named Sree Sanvika Sreesanth. Again they are blessed with a boy Suryasree Sreesanth on 23 November 2016.

Sreesanth made his cricket debut in domestic cricket in year 2002=03 against Goa. In 2004, he made a hat rick by playing against Himachal Pradesh in Ranji trophy. For his incredible performance he got succeed in making his selection to India B for the challenger trophy in 2005 October. When he played in challenger trophy he received Man of the series award and with that he got selected in National Team for ODI series against Sri Lanka in 2005. He took 87 test wickets, 75 ODI wickets and 7 T20 wickets in his long career of six years.

He played for the team King X1 Punjab from 2008 to 2010. Then in 2011, he played for Kochi Tuskers Kerala till the year 2013. After that, he drafted to Rajasthan Royals. In total, he played 44 matches of IPL and took 40 wickets. Sreesanth defeated Harbhajan Singh (captain of Mumbai Indians) on 25th April 2008. Harbhajan was trolled and therefore he slapped Sreesanth. In IPL 2013, Sreesanth was termed accused for match fixing along with Ajit Chandila and Ankeet Chavan when he was playing for Rajasthan Royals.

More Article on biography you may like to read as