Ruhanika Dhawan is one of the cutest and successful Indian television child actress. Her first break career was with the 2012 Zee TV’s show Mrs. Kaushik Ki Paanch Bahuein as Aashi. Then she was approached to play the role of Ruhi and now Pihu in Star Plus’s series Ye Hai Mohabbatein. She won several awards for her tremendous performance, including the Indian Telly Award for Most Popular Child Actress. Later in January 2014, Dhawan played a cameo in the 2014 Bollywood film Jai Ho. 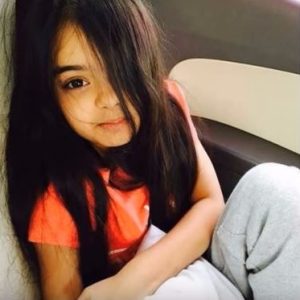 Ruhanika Dhawan was born on 25 September 2007 in Delhi, India. She studies in fifth class at IGSC school.She lives in Mumbai.She can speak in Hindi and English languages, and as well as Punjabi language, after being taught by actor Sunny Deol in January 2014. Her mother name is Dolly Dhawan. She is very close to her mother and father both. Her entry on Television is the one major decision of her mother.

She began her career with the 2012 soap opera on Zee TV as Aashi in Mrs. Kaushik Ki Paanch Bahuein. Later she featured to play the pivotal role in Ekta Kapoor’s romance-drama series Ye Hai Mohabbatein. She is cast with  Divyanka Tripathi, Karan Patel, and Anita Hassanandani Reddy, where she plays the role of Ruhi Raman Kumar Bhalla on Star Plus channel. The show was based on quite a popular novel  “Custody” written by Manjul Kapoor. Ishita (played by Tripathi), who is Tamilian whereas Raman (played by Patel), who is Punjabi. Ishita which is typical Tamilian marries Raman- a typical Punjabi boy and gets attached emotionally to Raman’s daughter, Ruhi, who lives with her divorced father.For her performance, she won the 2014 Indian Telly Award for Most Popular Child Actress and the Star Parivaar Awards for Rishta Nayi Soch Ka (2014) and Favorite Chota Sadasya (2015).The show recently took a 7-year leap. Nowadays, she is playing the character of Pihu, Raman Kumar Bhalla who is the younger sister of Ruhi, biological daughter of Raman and Ishita, and surrogate daughter of Shagun (played by Hassanandani).

she approached to play in the 2014 Salman Khan starred action drama film Jai Ho, in which she appeared as a cameo while working in Ye Hai Mohabbatein,

She even been a showstopper for a fashion show, at which she appeared in Barbie attire. The event was held at the end of August 2014. she appeared as a guest in K9 productions comedy show Comedy Nights with Kapil on Colors TV in November ‘2014.

Ruhanika bagged to play in the 2016 action drama film Ghayal Once Again in feb’2015 starring Sunny Deol.The film is written and directed by actor Sunny Deol and produced by Dharmendra. It is based on the life of an encounter specialist officer of the Mumbai Police. The film was scheduled to release on 15 January 2016.

Ruhanika loves to go to school and studying for hours. She is quite a brilliant student and love art. During her work, she prefers not to miss school and generally work after the school hours. Her school friends and teacher also watch her on daily soap and movies and appreciate her for the talent she embeds. Ruhanika’s English is very good and she prefers speaking in English. Although, her mother is Punjabi she finds it difficult to speak in the Punjabi language.