Rohitash Gaud is a well-known television and film actor. He played an amazing role in the SAB TV channel as Mukundilal Gupta in the show: Lapataganj Sharad Joshi Ki Kahaniyon Ka Pata. He is currently portraying in the much-known comedy show ‘Bhabhi Ji Ghar Pe Hain’.  He is best known for his stunning acting skills a comedy. 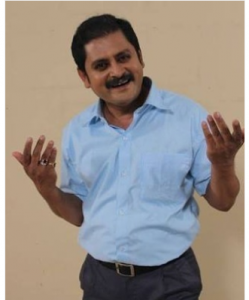 Rohitash Gaud was born on 16th October 1967 in Mumbai, Maharashtra. Rohitash is a quiet person and is extremely committed as a performing artist. He is a very talented and versatile person. He performs all his characters effortlessly and entertains the audience with his superior comedy and acting skills. He is 5 feet and 6 inches in height.

Rohitash Gaud is extremely talented and versatile actor. His first debut role was in Bollywood biographical movie named ‘Veer Savarkar’ that was released in the year 2001. He had worked in 11 films as aside role artist. His dedication towards his work is just estimable and appreciable. His second movie was ‘Pratha’ released in 2002 starred Irrfan Khan. Then in 2003, he portrayed a small role of the sibling of Manoj Bajpai in movie ‘PINJAR’. Also, he worked in Munna Bhai MBBS but has played a very short role in it. Following that, he also worked in the movie ‘Lage Raho Munna Bhai’ in which he played a significant role of Boman’s Irani secretary cuckoo and played a commendable role in it.

The actor got popularity after his stunning role in TV show Lapataganj. He was able to grab fame from the audience and also got awarded 3 times for the role he portrayed. Moreover, he is working currently in the comedy shoe Bhabhi Ji Ghar Pe Hain in which he is playing the role of an undergarments businessman Manmohan Tiwari. The serial has a good TRP and is going great by grabbing more attention of the audience. The other TV serials done by Rohitash gaud are ‘Agnichakra’, ‘Daddy and Noddy’, ‘Khushi’, ‘Yeh Pyaar Na Hoga Kam’ and few others.