Elegant Ritika Sajdeh is the wife of Indian cricket player, Rohit Sharma. She has an amazing personality and a top level sports manager. She came into limelight when her husband scored 3rd double hundred in a match against Srilanka in December 2017. 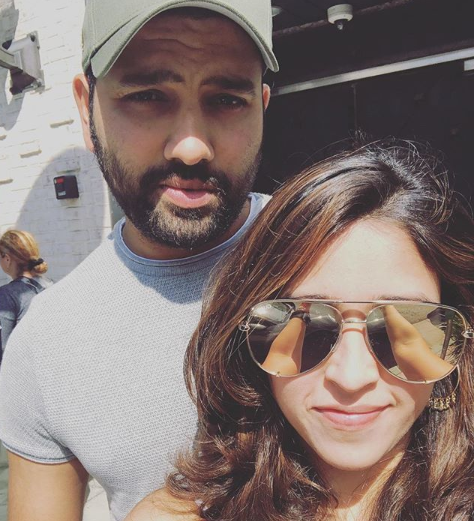 Ritika Sajdeh was born on 21st December 1987 in Ahuja Towers, Worli, and Mumbai. She belongs to a Hindu family. Her father name is Bobby Sajdeh and her mother name is Tina Sajdeh. She has a brother names Kunal Sajdeh. It was also said that Ritika is the Rakhi sister of cricket player Yuvraj Singh. She has obtained her education from Mumbai. She remains active on social media and uploads very often her pics with her husband, family and friends.

Rohit and Ritika have known each other for more than 6 years. It was known from the sources that Rohit proposed Ritika with a diamond ring at Borivali club where he begins his cricket career. The news was then given top both side family members and it is carried forward with their engagement. The couple was spotted together thereafter in the awards and cricketing events and ceremonies. Ritika Sajdeh got hitched to Rohit Sharma on 13th December 2015. The couple has a baby girl named Samaira. She has a very great relationship with her husband. She always supports him and remains present in stadium whenever Rohit plays. Rohit also uploaded a picture on social media with his wife Ritika Sajdeh and twitted ‘from best friends to soul mates, couldn’t get any better’