Ridhima Pandit is an Indian actress and model who started her career with a TV serial telecasted on Life OK’s- “BAHU HUMARI RAJNIKANT“. The Tv serial was quite different from today’s daily soap. She played a role of robot “RAJNI (Randomly Accessible Jobs Network Interface) a super humanoid robot. She gained enough popularity with her heart melting performance. She has done many advertisements. Ridhima started her career as a model. She had done many modeling projects like Sunsilk, Fair & Lovely, Dove, Harpic, Center Fresh, Veet, Luminous, Set Wet and many more. She was a part of Nadira Babbar’s theatre group. In 2017 she became hosted the reality dancing show- DANCE CHAMPIONS along with Raghav Juyal. 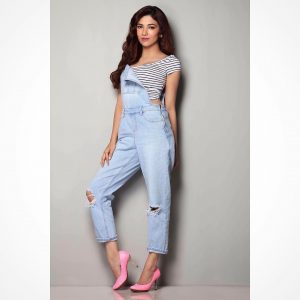 Her birthplace is Mumbai, Maharashtra, India. She was born on 25th June 1987. Her current age is 31 years. She likes spending most of her time with her family and friends. Her mother is Gujarati and her father is Maharashtrian but she enjoys both the cultures equally. She keeps herself healthy and fit. She does not smoke. Since childhood, she has the habit of imitating people in her family and her favorite actor.

Ridhima Pandit emerged as a brilliant actress after doing theatre for around 2 years under Nadira Babar’s Ekjute. She likes experimenting with her roles and that’s what we can see from her first performance in Bahu Humari Rajnikant on Life’s Ok where she played a role of Robot disguised as typical Indian daughter-in-law(bahu). She then appeared as a co-host for the reality dancing show- DANCE CHAMPIONS on Star plus. Although the level of hosting was set quite high by Raghav Juyal, she managed to drag everyone’ attention towards her. Moreover, she was seen in add commercial with Katrina Kaif. She has done add with Rahul Dravid for Asian Paints. She was also worked as an artist manager for Sonu Sood.

Ridhima has dated Eshaan Roshan, son of music composer Rajesh Roshan, and Hritik’s Roshan cousin. While Ridhima has never admitted to dating Eshaan Roshan, the industry is aware of their relationship. A source close to the couple said, “Ridhima and Eshaan Roshan first met when they were 14 and started dating four years later. However, after being together for 10 years, their relationship has now gone kaput. What’s endearing is that they continue to be friends. There might be a mentality that the couple parted ways, owing to Ridhima’s busy schedule, but that’s not true, as Eshaan had always been supportive of her career. Nobody is responsible for the break-up; it’s just that they have outgrown each other. For now, they are focusing on their careers.