Nuckelya ia stage name for Udyan Sagar who is very much popular among audience by his stage name Nucleya. He is an Indian electronic music producer.His talent of using unique usage of Indian street sounds has made him a countrywide phenomenon. He has truly managed to build gap between the indie and mainstream in such a unique way that few artists have. Nucleya’s kitsch, bass-heavy sound has been lapped up by the masses and he continue to release new music, stretching the limits of his genre.

Nucleya gained most of his popularity when he founded Bandish Project with fellow musician Mayur Narvekar, and then-manager Mehirr Nath Chopra. Now as Nucleya, he has countless milestones under his belt, along with some much-loved albums and the dedicated fan-base to sell-out a stadium. 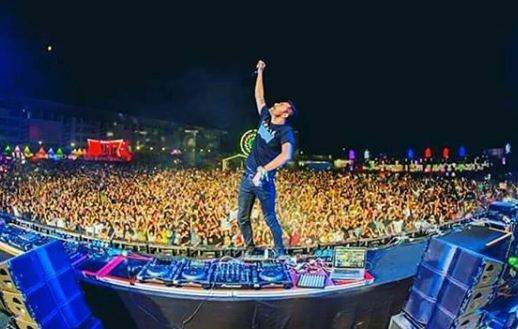 He is basically from Uttar Pradesh. UP is his birth place. He was born 7 December 1979. He is currently 39 years and live with his wife and daughter in Goa. Udyan Sagar, grew up in Ahmedabad

He is countrywide phenomenon and continues to release new music, stretching the limits of his genre. In 1998 he cofounded Bandish Projekt with Mayur Narvekar and Mehirr Nath Choppra. He walked off Bandish Projekt during some internal issues in 2007after working with Mayur for about 12 years, and began to rebuild himself as Nucleya. During this time he was financially assisted by his wife. In 2018, he appeared as a judge on Amazon Prime Video web series, The Remix, along with Sunidhi Chauhan and Amit Trivedi.

His song Akkad Bakkaad from his album Koocha Monster was tremendous success and bought him into limelight and after Koocha Monster there was no stopping back. His two new craetions that were Bass Rani and Raja Baja were widely appreciated. Nucleya did an Raja Baja album launch in Pune and sold a full stadium!

He have collaborated with The Dewarists twice for Heer with Shruti Pathak and Memories with singer Papon. Nucleya worked with Benny Dayal for Tamil Fever which was a major hit. Karan Johan after listening to the track contacted both to create Lets Nacho from the movie Kapoor and Sons (2016) with rapper Badshah.

This man has performed in many international music festival including Glastonbury and Edinburgh Fringe Festival, and recently EDC Mexico. He is also active in Indian music festivals such as NH7, Red Bull Tour Bus and Bacardi House Party, etc

His track Aaja ft Avneet Khurmi and Guri Gangsta was the chartbuster of Bass Rani and an emotional one for him because it features his 10 y/o son’s voice, Guri Gangsta.

He is married to Shruti Chaudhary and they both have a daughter name Gori. They live happily in GOA. His wife Smita Chaudhary has designed the logo of his albums Bass Rani , Koocha Monster and Raja Baja.