With her bold and passionate statement towards Acting and Singing, Mithila Palkar became one of the very few YouTube discoveries. Her first cup song ‘Hi Chal Turu Turu’ was inspired by a famous Singer, Anna Kendrick, and was a stepping stone in her journey to become famous. Very soon, with her exceptionally determined attitude, she became an Internet sensation and therefore, the heartbeat of millions. 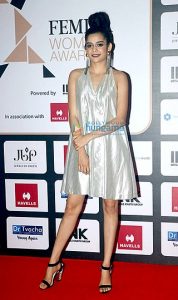 Although very little is known about Mithila’s family, she is quite a passion persuader as she comes from a non-acting background. Her sister holds a Ph.D. in Neuroscience and her family wished similar qualifications from her. However, it was quite hard for her to ignore the acting bug inside her. With much effort, she managed to complete a major in advertising, and then shifted her entire focus on acting. That’s when she landed a role in her first debut film ‘Katti Batti’ as a supporting role of Imran Khan’s sister.

The 25 years old, young and ambitious, Mithila Palkar is well known for her arresting spontaneity on screen. Her role as Meera Sehgal in the web series “Girl In The City” related to every young persuader out there in a quest for their dreams. She was then seen in another web series of Dice Media “Little Things”, followed by a role of an ambitious girl in a Marathi film “Muramba”.

Meanwhile, she released her cup song in Marathi, which made her an Internet sensation overnight. Her roles in the videos created by FilterCopy and Dice Media as a befuddled girlfriend or an annoyed sister have hit millions of watches on YouTube. “Confusing Things Girlfriends Say”, “Things Brother and Sisters Do”, “Annoying Things Boyfriends Do” are few videos which draw her huge attention through social media. As of now, the actress’s Instagram following is over 8, 18,000 and still counting.

Very soon, Mithila will be seen in a lead role in the movie “Karwan”, which is scheduled to release on 1 June 2018, starring Irrfan Khan, Dulquer Salman and Kriti Kharbanda.

BEAUTY IN A BOMBSHELL

The way Miss Palkar carries herself, whether on screen or behind the cameras, has guided every girl to be like her, enough determined and courageous. The confluence of her on screen and off screen persona drives her massive fan following.  The charm in her voice and the curly black hairs on the fair skin compliments her divine beauty. Often, the reason behind her success is measured by her cute and lovable innocence and her genuine appearance in front of the camera.