Super talented Keerthy Suresh is a Tamil, Malayalam and Telugu actress. She made her movie debut with the Malayalam horror film ‘Geethanjali’ produced by Priyadarshan. 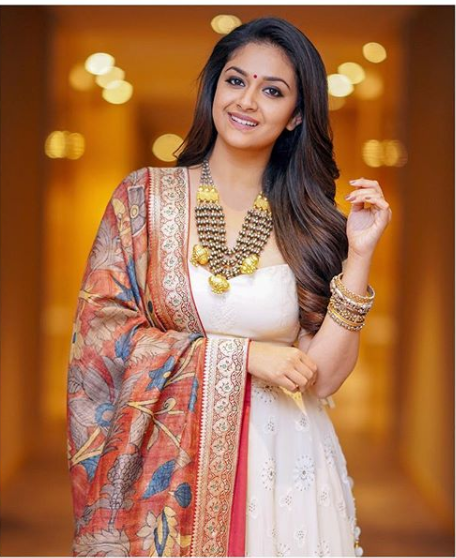 Keerthy Suresh is called by his closed ones with her nickname ‘Keerthana’. She was born on 17th October 192 in Chennai, Tamil Nadu. Her father name is Suresh Kumar who is a Malayalam film producer by profession and her mother name is Menaka who is an actress. She also has a married elder sister who is a VFX specialist and worked for Shahrukh Khan’s production house Red Chilies earlier.

She has started her schooling from Chennai, Tamil Nadu. After completing her 4th standard, she shifted to another school, Kendriya Vidyalaya, Pattom, Thiruvananthapuram, Kerala. When her schooling gets finished, she took admission in Pearl Academy, Chennai, and Tamil Nadu to obtain her degree of graduation in fashion designing.

It was rumored that Keerthy Suresh is married to comedian Satish but she never accepted this statement.

The career journey of Keerthy Suresh was begin in the year 2000 with the Malayalam movie ‘pilots’ in which she was featured as a child artist. She has also done movies like ‘Achanayikistam’ and ‘Kuberan’ in her childhood. She made her lead debut with the movie’ Geethanjali’ in the year 2013. During the shooting of that movie she was doing her diploma and managed to shoot the scenes while she was on her break. Some of the other movie she has done so far is mentioned like ‘Ring Master’, ‘thodari’, Bairavaa, etc. Along with doing movies she has also seen in the TV serials ‘Santhana Gopalam’ and ‘Krishna Kripa Sagaram’. She has also received recognition for her mind boggling performances and acting skills which won the hearts of masses.

SOME UNKNOWN FACTS ABOUT KEERTHY SURESH