Jennifer Kotwal is sensational beauty which hails from the city of dreams that is Mumbai, India. She was an ace student and completed her studies with a degree in Economics at HR College, Mumbai. She started her acting career at a very early age of 15. At the beginning, she worked as a model for advertisements with popular brand names like Close up toothpaste, Fanta, Sunsilk, Cadbury, Hero Honda, Reid & Taylor, Elle 18 among several others. She has also done movies, special appearance, and modeling assignments. There was a time when she became a household name and a sensation among youngsters when she acted in the lead role in the hit television teenage drama called Just Mohabbat. 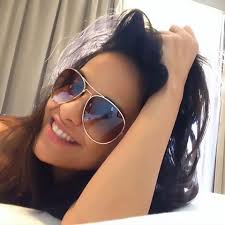 As mentioned above also, she worked with known brands at a very young age like Close up toothpaste, Fanta , Sunsilk , Cadbury, Hero Honda,Reid & Taylor, Elle 18 among several others. She became a household name and a sensation among youngsters when she acted in the lead role in the hit television teenage drama called Just Mohabbat. She then did a special appearance in a Hindi film such as Subhash Ghai’s Yaadein, before landing the lead role of a vibrant school girl, in the 2005 Kannada movie Jogi opposite Shivarajkumar, which set box office records blazing and turned out to be a huge hit ,thus establishing herself as a leading contemporary actress of Kannada cinema and went on to act in several other southern movies that came her way.

Recently, she had a fan moment of her own. The actress, who was in Dubai, recently met model and teen style icon Kendall Jenner, who is also Kim Kardashian’s half-sister. Jennifer posted a picture with Kendall on a social networking site, and captioned it, “Love her Kendall Jenner #AboutLastNight #HousePartyThangs #December #Cray #Dubai ”

A recent interview reveals that she choosy about her films and happy the way she works. She said “I will accept any film that has a good storyline. I know most Kannada films have a good story, and the industry people are really hardworking. Another advantage is that Kannada films are finished on the planned date. As for the roles I would like to do, I should say that I would like to work in different types of roles. I would like to do comedies as well as emotional roles. I am basically a director’s actor, and it is left to the director to get the best out of me. “Well! We wish her luck that she may get the work she desires.