Harshita Ojha is a promising television child actor. She is very beautiful and cute who has started her career at a very early age. The talented child artist played a leading role in Star plus TV serial ‘Veera-Ek Veer Ki Ardas Veera’.   The serial had the theme of sister and brother love. Harshita acted really amazing in the serial and impressed the audience with her stunning skills. She gave a tough competition to other child actors and act as a motivation for many. 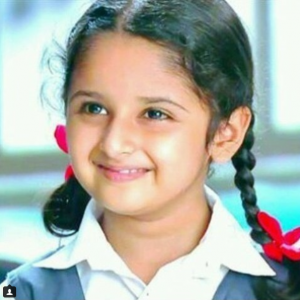 The child actress was born on 10th February. She belongs to small city of Dhanbad situated in Jharkhand. She belongs to a Hindu family. Her family consists of her father Sanjay Ojha who is a financial planner, her mother Reena Ojha, a housewife and her younger brother Harshit Ojha. Harshita is currently pursuing her schooling from children Academy School at Kandivali. She is studying in 5th standard. She is 6 years old and is challenging other child actors at such an early age.

Harshita Ojha started her career at age of 5years. She made her acting debut by portraying the little Veera role in Star plus TV serial ‘Veera-Ek Veer Ki Ardas Veera’. She got lot of appreciation and love from the audience after the serial. She was the lead role in the serial and acted amazingly in the show. Harshita told that she didn’t thought of pursuing her career in acting and always wanted to become a singer. She learned swimming, Kathak dance and singing and always seen herself as a singer in future. She wanted to be like Shreya Goshal. Along with the Veera shoe, she also acted in other shows such as Savdhaan India, Beintehaan and also in star plus show Tamanna.

The latest news about her is that she was chosen for Jay production jungle based concept in Life OK. The show will be produced by jay and Kinnari Mehta. The child actor will be playing role of daughter of a couple who is a major role in the show.