A poet by heart, a lyricist by profession and bold by personality, Gilu Joseph has penned her success with her courage and determination. Gilu is a known face of Malayalam Film Industry and has predominantly appeared in various movies. Her passion for writing traded her ways to carve lyrics for Malayalam songs which were greatly appreciated by the viewers. 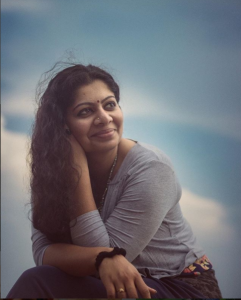 She was born in Kumily, Kerela to Joseph SJ and Annakutty Joseph. She along with her two sisters grew up in a Malayalam family. After high school, at a very tender age of 18 she moved to Dubai where she nailed the first career opportunity as a cabin crew with Fly Dubai. The young air hostess always had a thing for media arena, and therefore turned her career towards Showbiz industry successfully.

Her personal life is kept discreet from media and therefore it is quite difficult to comment on any relationships she has or had in the past.

Writing flows in her blood and her journey as a poet and writer marked her to be a notable writer of various Malayalam songs. She gave lyrics for over a dozen of songs as well as acted in few movies. Her contributions in writing include 2 Penkuttikal, C/O Saira Banu, Sathya, and Lailaa O Lailaa.

Moving towards her career as an actress, Gilu Joseph made her first acting silver screen in a Malayalam Movie ‘Jacobinte Swargarajyam’ in the early 2016. She was casted as a supporting actress alongside Nivin Pauly, Renji Panicker, Sreenath Bhasi, and Lakshmy Ramakrishnan. Thereafter she was seen in other films such as ‘C/O Saira Banu’ and ‘Thrissivaperoor Kliptham’.

Her works as a poet and writer have touched many hearts. She was honored with Palm Pusthakapura Akshara Thoolika Award for her notable contributions in the same.

The writer, actress, and showbiz model strongly belong to the Malayalam Entertainment Industry, however, she came into limelight when one of her magazine covers goes viral on the internet breastfeeding a baby. She shot the cover for the Malayalam Magazine ‘Grihalakshmi’ under their Breastfeed freely campaign which invited her nationwide fame and controversies.

The media referred the picture obscene as a model was covered breastfeeding instead of a real mother. The controversy around the cover grew dominantly as the model was unmarried and had no children of her own. She not only faced the major outrage but even a legal case was filed against her and the owner of the magazine.