Dhinchak Pooja is reel name of Pooja jain who got popularity after her songs on internet. She is basically a youtuber and singer. She received media attention after her music videos such as Swag Wali Topi (2015),Daaru (2016), Selfie Maine Leli Aaj (2017), Dilon Ka Shooter (2017), Baapu Dede Thoda Cash (2017),and Aafreen Fathima Bewafa Hai (2017),received millions of views on YouTube, shortly after their individual releases.[11][9] Her songs have been subject to wide-ranging criticism, and have often been described as part of a new trend of producing cringe-worthy videos to gain web-fame. On 11 June 2017, in response to an individual complaint, YouTube deleted all the song-videos on grounds of privacy violation. The videos, though have been re-uploaded by other users and continue to be available.

The girl who amazed or we say shocked all the music lovers in the country with her ‘out-of-the-box’ songs was born in Uttar Pradesh and currently is living in Delhi. It was her friends who made her believe that she is a good singer and from then her journey to cringe-pop stardom began 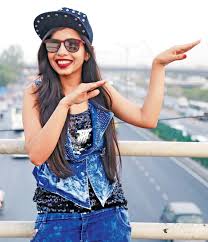 She became an internet sensation when she released her first song in 2015. The first song which made her popular was “Swag Wali Topi” which Dinkha Pooja shared on her several social media accounts. With her quirky song“Selfie Maine Le Li Aaj” Pooja became popular on the Internet as it went viral for not exactly the right reasons. Foraying into cringe-worthy pop, Pooja made sure all her songs were tone-deaf and off-note. Her growing popularity made her bank account healthy without any consideration by her that how much she was trolled on Twitter and Facebook for her songs. She earned over Rs 7 lakhs because of more than 25 million views on the selfie song. Don’t be amused and wonder that how her songs are so entertaining. Reality Check- You really gotta visit Twitter account. The singer almost appears as a philosopher in disguise as she doles out one advice after another

Because of her entertaining popularity, she succeeded to enter one if the biggest reality show on colors channel “BIG BOSS 11” where she entered as a wild guard entry and definitely entertain the audience with her live songs and tantrums.