Stunning Banita Sandhu is the top latest upcoming actress in the Bollywood industry. Her name suddenly pop-up when she was decided as the leading lady opposite to Varun Dhawan in their movie October directed by piku fame Soojith sirkar.  Getting such big-name fame without any Bollywood connection is what making her highlights in the Bollywood and among people. 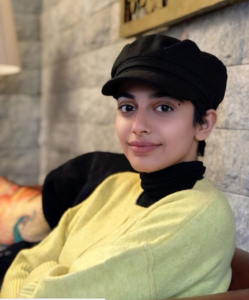 Banita Sandhu born in 1998 is a Punjabi NRI in Wales, United Kingdom. She has been in this field of acting and modeling since childhood. She never went noticed in the crowd till now. She had seen firstly in the Vodafone ad which was shooted in Malaysia. It was a powerful one as it shows that she is a very open girl who loves to stay connected with her friends. She had also done double mint ad very gracefully opposite to actor adi.  This ad shows the deep friendship and love bond between two youngsters. The ad got a lot of appreciation and crossed over 10 million views on YouTube. Banita is a dauntless and vivacious young lady and on account of this bubbly identity of hers she looks especially cute in the advertisement films.  After that, she went on a long break so that she can focus fully on her acting career.

Banita was studied in London and belongs to a Punjabi family; mainly her grandparents are from Punjab. She is very much active on social platforms. She likes to stay updated with new trends and fashion. She always likes to interact with people who like her and her splendid appearance are making her name a special one. She is a huge fan of Badshah of Bollywood Shah Rukh khan. She is unmarried as of now and does not have any boyfriends or affairs.

Fortunately, she has got a marvelous opportunity of playing a lead actress. Juhi Chaturvedi, the writer of blockbuster films piku and Vicky donor has noticed the glimpse of Banita in her sensational video of Ek ajnabee haseena se mulakaat ho gayi sung by legendary singer Kishor Kumar.  She found her perfect for the lead role in upcoming movie October alongside Varun Dhawan.

More Article on Celebrity Biography you may like as