Aditi Bhatia is a famous teen star in the Entertainment Industry. She made her first appearance onscreen as a child actor and currently playing the role of grown-up “Ruhi Bhalla” in the popular TV show “Yeh Hai Mohabbatein”. This uprising actress is widely loved and accepted by the viewers for her charm and acting sense. 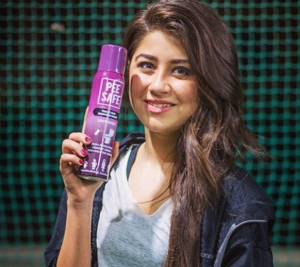 Miss Bhatia initiated her acting career as a child artist. Her first debut was in the year 2006 Bollywood film “Vivah” starring Shahid Kapoor and Amrita Rao. She also appeared as an onscreen daughter of Imran Khan in the movie “The Train”. She was then seen in two other movies “Shootout at Lokhandwala” (2007) and “Chance pe Dance” (2010). Aditi was truly encouraged in her childhood debuts and made a successful career out of all the roles she played as a child actress.

She made her first Television debut in 2015 with “Tashan-e-Ishq”. She portrayed Bubli Taneja in a subtle way and received widespread recognition for the same. Presently, Aditi is starred in “Yeh Hai Mohabattein” telecasted on Star Plus.

Other than the movies and TV serials Aditi has done various TV Commercials and was also a part of “Comedy Nights Bachao Season 2” along with Bharti Singh, Sharad Malhotra, and Nia Sharma.

The Studious Aditi belongs to Mumbai, where she completed her high school and currently pursuing graduation. Her mother Bina Bhatia is a teacher by profession. Aditi shares a strong bond with her mother.

Aditi says; although she is a star kid, she is too young for love and relationship. She was often linked with her co-star Abhishek Verma in correspondence to their healthy friendship on the sets of “Yeh Hai Mohabbatein” and offscreen as well. However, both the actors have assured that they are just good friends and have fun at work and afterward.

Having been successful at such a young age, this young and beautiful actress has made a place for herself both in the Entertainment Industry and in the hearts of her fans. Fashion and style go hand in hand with her iconic beauty and charming personality.

Along with the TV, She has endorsed many brands such as Kashmiri Vanaspati, Dr. Batra, and Vicks Vaporup which made her a very familiar face to everyone. She currently has millions of fans on her social media profiles.